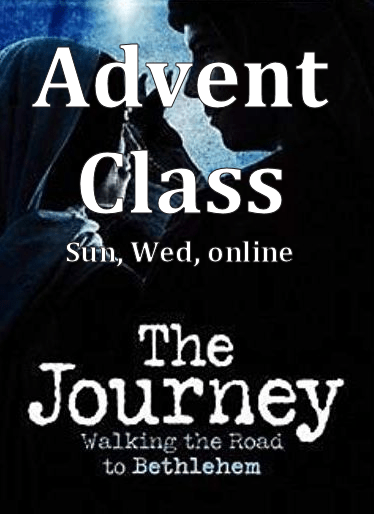 Following the same format as Class #1, this version has many of the same questions my class will discuss. All references are from Chapter 2.

Create in me a clean heart, O God, and put a right spirit within me
Do not cast me away from Your presence, and do not take Your Holy Spirit from me.
Restore to me the joy of Your salvation and sustain in me a willing spirit.
O Lord open my lips, and my mouth will declare your praise. Amen.

Be sure to let me know if you have questions that role over from any of the classes.

Describe your image of Joseph in one sentence the way you would have before reading The Journey, Chapter 2 for this session.

From where did your images come?

What story books were read to you that helped to shape these images?

Do you see Joseph as young, middle-aged, or old?

How have these images changed or broadened through the reading of Chapter 2?

In your opinion was Joseph a passive observer or active participant?

On Page 44, Hamilton seems to be saying (in paragraph 3) that Joseph thinking of divorcing her (before the Angel appears), and then people finding out she was pregnant would make him look like the father and thus he would be “taking the blame to save Mary’s life.” What do you think of that possibility?

Matthew 1:18-25 New International Version (NIV)
18 This is how the birth of Jesus the Messiah came about[a]: His mother Mary was pledged to be married to Joseph, but before they came together, she was found to be pregnant through the Holy Spirit. 19 Because Joseph her husband was faithful to the law, and yet[b]did not want to expose her to public disgrace, he had in mind to divorce her quietly.
20 But after he had considered this, an angel of the Lord appeared to him in a dream and said, “Joseph son of David, do not be afraid to take Mary home as your wife, because what is conceived in her is from the Holy Spirit. 21 She will give birth to a son, and you are to give him the name Jesus,[c] because he will save his people from their sins.”
22 All this took place to fulfill what the Lord had said through the prophet: 23 “The virgin will conceive and give birth to a son, and they will call him Immanuel”[d] (which means “God with us”).
24 When Joseph woke up, he did what the angel of the Lord had commanded him and took Mary home as his wife. 25 But he did not consummate their marriage until she gave birth to a son. And he gave him the name Jesus.

Matthew 1:18-25 King James Version (KJV)
18Now the birth of Jesus Christ was on this wise: When as his mother Mary was espoused to Joseph, before they came together, she was found with child of the Holy Ghost.
19Then Joseph her husband, being a just man, and not willing to make her a public example, was minded to put her away privily.
20But while he thought on these things, behold, the angel of the LORD appeared unto him in a dream, saying, Joseph, thou son of David, fear not to take unto thee Mary thy wife: for that which is conceived in her is of the Holy Ghost.
21And she shall bring forth a son, and thou shalt call his name JESUS: for he shall save his people from their sins.
22Now all this was done, that it might be fulfilled which was spoken of the Lord by the prophet, saying,
23Behold, a virgin shall be with child, and shall bring forth a son, and they shall call his name Emmanuel, which being interpreted is, God with us.
24Then Joseph being raised from sleep did as the angel of the Lord had bidden him, and took unto him his wife:
25And knew her not till she had brought forth her firstborn son: and he called his name JESUS.

Matthew 1:18-25 The Message (MSG)
18-19The birth of Jesus took place like this. His mother, Mary, was engaged to be married to Joseph. Before they came to the marriage bed, Joseph discovered she was pregnant. (It was by the Holy Spirit, but he didn’t know that.) Joseph, chagrined but noble, determined to take care of things quietly so Mary would not be disgraced.
20-23While he was trying to figure a way out, he had a dream. God’s angel spoke in the dream: “Joseph, son of David, don’t hesitate to get married. Mary’s pregnancy is Spirit-conceived. God’s Holy Spirit has made her pregnant. She will bring a son to birth, and when she does, you, Joseph, will name him Jesus—’God saves’—because he will save his people from their sins.” This would bring the prophet’s embryonic sermon to full term:
Watch for this—a virgin will get pregnant and bear a son;
They will name him Immanuel (Hebrew for “God is with us”).
24-25Then Joseph woke up. He did exactly what God’s angel commanded in the dream: He married Mary. But he did not consummate the marriage until she had the baby. He named the baby Jesus.

5. What insights did you gain from reading the scriptures in 3 different translations?

What is the primary lesson for us to learn about Joseph and his part in the birth of Jesus Christ?