Please enjoy our newsletter for January 2018. 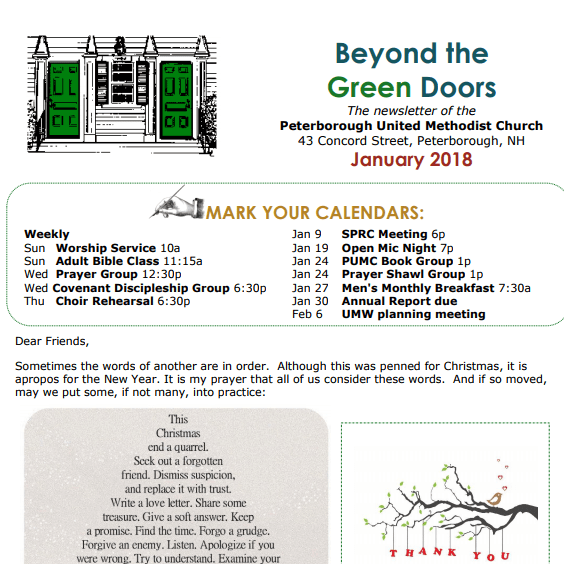 Sometimes the words of another are in order. Although this was penned for Christmas, it is apropos for the New Year. It is my prayer that all of us consider these words. And if so moved, may we put some, if not many, into practice:
[image]
My family and I are sincerely grateful for the Christmas Gift. Thank You all for your love and appreciation.

FROM THE SHELF
Never Alone – A Personal Way to God by Father Joseph Gerzone (also wrote the Joshua series) (248.4)
An easy reading book by an author who answers the unasked questions that lie hidden in so many hearts.
He discusses his ideas on the difference between theology and spirituality. He feels that the purpose of our lives is to grow into a fully matured child of God. Becoming spiritually mature means to practice various virtues, such as patience, courage or love. “God places us in different circumstances and gives us the grace to accomplish things that demand extraordinary love of God and others.”

HOMELESS VIGIL
The vigil for the homeless was held on December 21, the longest night of the year. About 30 people gathered in Central Square in Keene to remember those members of the homeless community that passed away during the year. The event was part of the National Homeless Persons’ Memorial Day which is held every year on December 21 – the first day of winter. In many cases, this service is the only commemoration of the lives of those who have died.

MANY THANKS
Thanks to everyone who planned and participated in our holiday season services this year!

“For all the possibilities ahead in this new year make us thankful, O Lord.
Give us wisdom, courage and discernment in the face of so much chaos, despair, and fear.
Help us to see how, in our circumstances, we can contribute toward peace, faith, and love.
And give us the will to translate our desires into actions.”
—Brother John Charles, Society of Saint Francis

500 YEAR ANNIVERSARY OF THE REFORMATION

Susan and my trip to Germany coincided with the 500th anniversary of the beginning of the reformation. While books can (and have) been written concerning the reformation, I include here a short summary of the events starting in 1517.

The reformation was said to have begun on 31 October 1517 when Martin Luther wrote to bishop Albrecht von Brandenburg, protesting the sale of indulgences by the church. In the letter he included a copy of his “Disputation of Martin Luther on the Power and Efficacy of Indulgences”, which came to be known as the Ninety-five Theses. (a translation can be found at this link – www.ninety-fivetheses.com ) At the time is was said “As soon as the coin in the coffer rings, the soul from purgatory springs.”

Martin Luther insisted that, since forgiveness was God’s alone to grant, those who claimed that indulgences absolved buyers from all punishments and granted them salvation were in error.

Martin Luther’s letter led to a succession of events which ended in his excommunication by Pope Leo X on 3 January 1521. Martin Luther was eventually brought before the church In Worms (note, German pronunciation of the “W” is as an English “V”). The Emperor presented the final draft of the Edict of Worms on 25 May 1521, declaring Luther an outlaw, banning his literature, and requiring his arrest. It also made it a crime for anyone in Germany to give Luther food or shelter and permitted anyone to kill Luther without legal consequence.

Martin Luther escaped with assistance from sympathizers and went in hiding at Wartburg Castle near Eisenach in Germany. It was in this castle that Luther translated the New Testament from Greek into German. His writings and support of the poor eventually resulted in an uprising which as defeated at the Battle of Frankenhausen on 15 May 1525. It was after these events that Martin Luther began building the foundations of the reformed church.

While I can admire many of Martin Luther’s actions, he is, in my opinion, not without fault. After reading the Qur’an, Martin Luther went on to produce several critical pamphlets on Islam, which he called “Mohammedanism” and he saw the Muslim faith as a tool of the devil.

He was not as kind to the Jewish faith and wrote negatively about the Jews throughout his career. It is said that his anti-Jewish rhetoric contributed significantly to the development of antisemitism in Germany and was used by the Nazis’ as justification for their actions. It is said that his writings were used as the basis of just about every anti-Jewish book printed by the Third Reich.

Susan and I visited Wartburg Castle in 2007. It is in a very pretty but out of the way location in the center of Germany and worth a visit as there is much history associated with the location.
– Hiel Lindquist

BEYOND THE GREEN DOORS
Church leaders should not be the only ones contributing to the newsletter! Send in your thank yous, birthdays, photos, events, testimonials, prayer submissions…
Please submit all materials for the next newsletter (January) to our editors by the last TUESDAY of the month, December 26. This is the newsletter that will be released on December 31 and cover until Sunday February 4. Please note next month submissions will be due the day after Christmas – you may want to send those early! Send to Melissa French, with the subject “Newsletter submission.” Thanks!

In addition to “Beyond the Green Doors,” Peterborough UMC offers the following ways you can keep in touch.
We are at the church. Come visit us, Sunday at 10 am!
We are on the web: http://www.PeterboroughUMC.org
We are on Facebook: http://www.facebook.com/peterboroughunitedmethodist/

This newsletter was compiled by Melissa French. Any concerns with content can be addressed with Pastor Lena.