Pastor Lena Mark, a board member for Hundred Nights shelter, wrote the following Call to Action to present at the Homeless Memorial Vigil held in Keene NH on December 21, 2016: 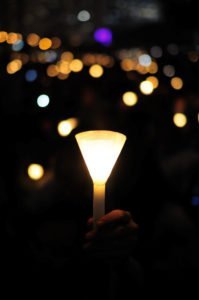 Watch the video posted by CJ the DJ:


Tonight we stand in unison – along with communities across this state and nation – to remember those who have, at one time or another, carried the stigma of being homeless and whose life journeys have come to an end. But I ask you, what exactly do we mean when we label these individuals “homeless?” Are we defining their character? Are we suggesting that they are carriers of a dreadful and contagious societal disorder or disease? Are we indicating, consciously or sub-consciously, that they are a sub-culture, one that lies beneath the surface of what society calls acceptable and politically correct?

And why do we speak of their passing in such hushed, almost secretive tones? Why do our actions and body language suggest that there is some insidious factor to their being homeless? And why? Why do we as a society play down their humanity, their dignity, their worth by habitually tagging on the word “just?” “That homeless guy?” we say, “Oh, he was just…” Or “That homeless woman? Oh, she was just…” Quoting a line from one of Johnny Depp’s characters, “Just. Such a horrible candle snuffing word… Just.” Permit me to paraphrase, “Just. Such a horrible ‘identity’ snuffing word, such a horrible ‘life’snuffing word. Just.”

The individuals whose names were read tonight were not “just.” They were not “just that old vet with PTSD, just an addict, just a mental case, just a drunk, just a loser, just a mess, just a…” you can fill in the blanks. These individuals lived and moved and had their being right here in the midst of us. They laughed and cried, they worked and played, they created and danced, they struggled and were victorious. They were loners and family members. They were young and old. They were individuals who found themselves, for whatever the reason, in the scary, demeaning, frustrating situation of having no “fixed, regular, and adequate” place in which to sleep.

According to US Code, Title 42, Chapter 119, Subchapter 1, Section 11302 the General Definition of Homeless Individuals are those individuals or families who lack a “fixed, regular, and adequate nighttime residence.” It goes on to say that if the primary nighttime residence is a car, park, abandoned building, bus or train station, airport, or campgrounds, then the person is considered homeless. I think it safe to add to that list those individuals whose residence is a bridge or train trestle, dugout at a ball park, city or park bench, heat duct or sidewalk, a hallway or stairwell, garage or shed, or a gazebo on the city common. And we can also include those who in are in shelters, transitional housings, charitable housing, and safe housing.

Curious, is it not, that this definition used by our federal government is not necessarily the definition used at state and city levels, nor by school districts, charitable and religious organizations, or even some government agencies. Imagine for a moment the frustration of finding yourself/your family in a position where there is no “fixed, regular, and adequate nighttime residence,” and as you work your way through the system, you discover that you /your family meet the definition of homeless from the school district but not the town or city in which that same school districts lies, thereby limiting your access to support and help. Can you imagine and understand the fear, the anger, and the eventual despair of individuals trying to navigate this fickle, varying, and inconsistent system?

It makes one wonder as to the purpose of this game of semantics. Are we as a society really more concerned about power, budgets, and aesthetics than we are humanity? Do we really believe that with little to no effort and action on our part the situation will miraculously disappear, so we continue to ignore it and remain silent? MLK Jr once quoted the opening line of statement of the executive committee of organization called Clergy and Laymen Concerned about Vietnam, which reads, “there comes a time when silence is betrayal.”

Permit to remind you of some of the lyrics of the song, ”Sound of Silence:”

Hello darkness, my old friend
I’ve come to talk with you again
Because a vision softly creeping
Left its seeds while I was sleeping
And the vision that was planted in my brain
Still remains
Within the sound of silence

And in the naked light I saw
Ten thousand people, maybe more
People talking without speaking
People hearing without listening
People writing songs that voices never share
No one dare
Disturb the sound of silence

“Fools” said I, “You do not know
Silence like a cancer grows
Hear my words that I might teach you
Take my arms that I might reach you”
But my words like silent raindrops fell
And echoed in the wells of silence.”

The sound of silence regarding the issue of homelessness is indeed a betrayal. The sound of silence is a betrayal of trust when towns put up a homeless family in a hotel in a different town or city, only to cut off all support and communication at the end of two weeks, leaving the individual or family to walk the unknown streets in search of shelter. It is a betrayal of faith when an individual or family finally finds a fixed, regular, kinda/sorta adequate shelter, but the weekly rent is $325 which consumes almost all of the weekly income, leaving no money for food, medications, or transportation. The sound of silence is a betrayal of hope when an individual or family is told that there is a waiting list of 18 months, 2 years, 5 years, even up to 8 years to get into the only affordable housing in the community – with no options for a fixed, regular and adequate place to sleep in the interim.

“People talking without speaking
People hearing without listening
People writing songs that voices never share
No one dare
Disturb the sound of silence.”

In August of 2015, the Department of Justice said the following in a statement of interest in a case in Idaho: “When adequate shelter space exists, individuals have a choice about whether or not to sleep in public. However, when adequate shelter space does not exist, there is no meaningful distinction between the status of being homeless and the conduct of sleeping in public. Sleeping is a life-sustaining activity – i.e., it must occur at some time in some place. If a person literally has nowhere else to go, the enforcement of the anti-camping ordinance against that person criminalizes them for being homeless.”

The wheel of society has many spokes – education and employment, health and wellness, housing and transportation, communication and safety. We all know that when one of the spokes begins to weaken and come loose, it affects not only the spokes nearby that now have to bear the extra weight and force, but the entire wheel. At any time these weak and wobbly spokes of society can lead an individual or family into the situation of not having a “fixed, regular, and adequate nighttime residence,” i.e., homeless.

Mahatma Gandhi reportedly once said, “The measure of a civilization is how it treats its weakest members.” Let’s take a look at our measure when it comes to homelessness:
In the US in 2015: Over 560,000 homeless
Those in shelters: over 390,000
Those un-sheltered: Over 170,000
Individuals: Over 350,000
Families: Over 200,000
Family Households: over 64,000
Chronically homeless individuals: over 83,000
Chronically homeless families: over 13,000
Veterans: over 47,000
Unaccompanied Children and Youth: just shy of 37,000
The facts are at once staggering, shameful and humbling. “The measure of a civilization is how it treats it weakest members.” 37,000 unaccompanied children and youth. Over ¼ of a million combined families and family household. And we are not factoring in the poverty that walks hand in hand with homelessness.

If we truly desire to see the end of homelessness, then it is time that we as a society drop our isolationist mentality and band together. It’s time to stop knee-jerk reactions and responses during time of crisis or only at the holidays. It’s time to stop endless humanities clubs and discussion groups, the debates and counsels, and The Holier-than-though/Better than thou attitudes/drum major instinct ministries. It’s time to stop focusing on easy, effortless, flimsy bandaids that serve only to appease the senses and afford a “good-ol’ boy” pat on the back. And it is time to stop this absolute nonsense of territorial ownership and unify our efforts as one community.

I ask that you give thanks for those who touched us with their presence, who were more than “Just” someone who had no place to sleep.

And now! Now it’s time to prove that there is a correlation between what you say and how you roll- donate to Hundred Nights or volunteer.