A Movie Review From Pastor Lourey: Heaven is for Real
November 11, 2014 at 1:44pm
This spring, several movies with Christian themes debuted in mainstream theaters. Alongside epic bible character-based projects like Noah and Son of God was a much smaller film focusing on church and Christian life. Though I rarely see new movies, I was prompted by questions from some of our members to see Heaven is for Real for myself.
I’ll confess I did not walk into the theater with an open mind. I’ve observed that most religious-themed films from Hollywood favor drama over honesty, either painting faithful people as brainwashed lemmings or oversimplifying life’s struggles into neat endings with a clear moral. In the end, my initial suspicion made my experience richer.
Based on the real experiences of the family at the center of the film, Heaven is for Real depicts a lay pastor’s journey through Job-like trials which lead to a crisis of faith when his son claims to have seen heaven. The vision turns out to be a problem instead of a comfort, as it polarizes the church, the community, and the pastor’s own family. Turns out, there is little more personal than our feelings about life after death. The film depicts the way that bonds can strain and break, even among folks who are supposed to share the same faith. Some characters say and do hurtful things. People are overwhelmed with fear and doubt. Even when affection turns to defensiveness, there are no villains in this movie. Instead, some of the deepest pain is felt and caused by those who most deeply love.
The church in the movie is a Wesleyan church, and I found many of the settings and relationships recognizable. I was delighted to see that the project was made with respect and awe. The story felt honest, and resisted “preaching” a director’s view or simplified Gospel. The truth is, faith is full of questions, and we can trust that life and family will eventually test our most basic convictions. The drama is in how we weather the test. Will we help each other hope in what is not seen? Will we come to accept news that changes us?
Heaven is for Real is no longer in theaters, but will likely become available on DVD and online. I recommend it for individuals, friends, and families prepared to discuss the questions it raises. Nothing in the film is inappropriate for children, but it is made to communicate with adult experiences of parenthood, grief, and responsibility. One last tip: you may need tissues! 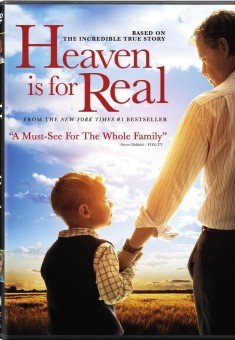 1 thought on “Movie Review: Heaven is for Real”