Sue Norton-Poplin from Peterborough United Methodist Church reads her original poem Get Up in honor of Tabitha from Acts 9:36-43, at the Spring Interfaith Celebration in Peterborough NH 3/17/19. 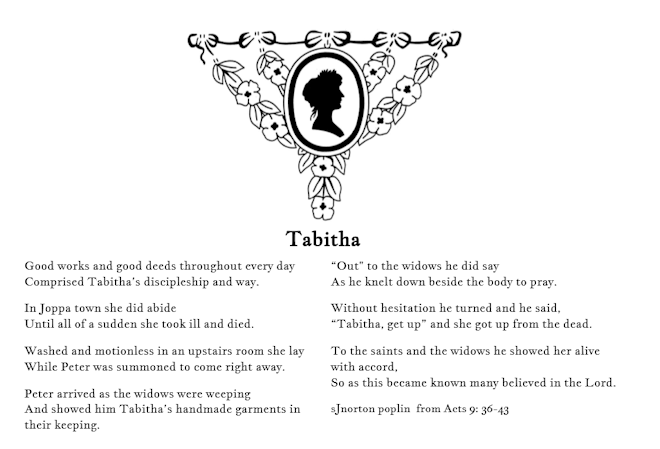 Good works and good deeds throughout every day
Comprised Tabitha’s discipleship and way.

In Joppa town she did abide
Until all of a sudden she took ill and died.

Washed and motionless in an upstairs room she lay
While Peter was summoned to come right away.

Peter arrived as the widows were weeping
And showed him Tabitha’s handmade garments in their keeping.

“Out” to the widows he did say
As he knelt down beside the body to pray.

Without hesitation he turned and he said,
“Tabitha, get up” and she got up from the dead.

To the saints and the widows he showed her alive with accord,
So as this became known many believed in the Lord.

36 In Joppa there was a disciple named Tabitha (in Greek her name is Dorcas). Her life overflowed with good works and compassionate acts on behalf of those in need. 37 About that time, though, she became so ill that she died. After they washed her body, they laid her in an upstairs room. 38 Since Lydda was near Joppa, when the disciples heard that Peter was there, they sent two people to Peter. They urged, “Please come right away!” 39 Peter went with them. Upon his arrival, he was taken to the upstairs room. All the widows stood beside him, crying as they showed the tunics and other clothing Dorcas made when she was alive.

40 Peter sent everyone out of the room, then knelt and prayed. He turned to the body and said, “Tabitha, get up!” She opened her eyes, saw Peter, and sat up. 41 He gave her his hand and raised her up. Then he called God’s holy people, including the widows, and presented her alive to them. 42 The news spread throughout Joppa, and many put their faith in the Lord. 43 Peter stayed for some time in Joppa with a certain tanner named Simon.

*Please do not use this original poem without permission!

Read more about Sue at PurpleSunflowerStudio.com