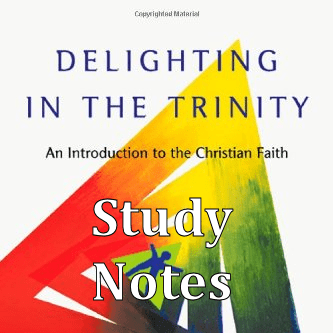 Session 2 Delighting in the Trinity: The Father’s Love Overflows

1. Have you ever wondered why God would create us and this world?

2. Reeves talks about Aristotle’s claim, “that for God to be himself, God needs the world.” What is your take on this?

3. Reeves says it is “God’s overflowing love for the Son that motivated the Father to create.” Does that make sense to you? Why/Why not?

5. Singular Gods seem content with themselves. Why, Reeves argues would they want to be involved with creation? (He claims it is to make slaves.) Agree/disagree.

6. What is your understanding of Gnosticism, either from Reeves or your own research? (Gnosticism: a prominent heretical movement of the 2nd-century Christian Church, partly of pre-Christian origin. Gnostic doctrine taught that the world was created and ruled by a lesser divinity, the demiurge, and that Christ was an emissary of the remote supreme divine being, esoteric knowledge [gnosis] of whom enabled the redemption of the human spirit.)

7. Reeves seems to be saying Absolutely supreme beings would have no room for anything else. Does this ring plausible to you?

8. Human sexuality and sexual competition and exploitation are not new themes. What do you think the Scripture in general and Christian tradition specifically is trying to say to help us live in harmony?

9. Page 58 says, “The creatures of the triune God are not mere extensions of himself; God gives them life and personal being.” What do you think of this statement?

10. To all of you who love and produce and understand music is the concept of harmony on target when describing the Trinity and universe and its order? (p. 59)

11. Have you ever been touched by music in a special way?

12. Reeves believes the stars are there because God loves. How does that strike you?

13. Reeves sees a difference between how God creates and why God creates. Do you resonate with his why God creates? He is saying God is the love behind all love, page 62. Agree/disagree.